It is a lovely thing to follow a dirt track across a park from one side to the other. It feels wayward, it satisfies a delinquent urge to deviate from the suggested route.

There are few maps as we wrestle to make sense, establish order and chart courses through online spaces, and it’s time to remind ourselves that there are good reasons to carve our own connections and pathways and perhaps even, create digital desire paths.

Urban planners try to anticipate the paths which will appear naturally as people decide for themselves the most direct and convenient routes to take. We see them most usually across parks and open spaces, linking buildings, as shortcuts or routes to common destinations.

Desire paths are formed from an act of simple disobedience, often we don’t walk in straight lines or turn at ninety degree angles and if we want to go from A to B then we do. These routes are democratic, open and sometimes kinder. It’s common to see a path down a slope adjacent to steps. As the name suggests, there’s frisson of pleasure, a moment of delight in walking a desire path, a little hit.

Even the motorways that cut through the countryside started out as simple paths, animal tracks across fields that were paved as the traffic increased, as the loads people carried increased, as we moved from walking to horse and cart, carriage, bicyles, cars, lorries and trains.

Is this something that we’re still doing? Are we creating digital desire paths? Lines of communication, systems, ways of working that are simpler, quicker and easier? Does the internet enable us to link ideas in the shortest most simple and seemingly obvious way? We find ourselves removing something, refining something, changing something or creating something entirely new.

I like the idea that art can be made anywhere, perhaps seen by few people, or not recognised as art when they do.
Richard Long

Our start and end points aren’t usually as clear as in geographic spaces. A desire path never meanders, it never takes a winding course. Although it’s a psycho-geography, no desire path was ever created without knowing where it was leading to.

We see these paths appearing in education and technology, between the commercial and not-for-profit, between individuals and groups. Let’s try to create networks that are as desire paths, democratic, connected and emerging, chosen by the people using these spaces, shaped through the structures built for us and by us.

It only takes a few people to create a path, they form when we see a common solution, a route that just makes sense. We need to find better ways to communicate and talk to each other, send messages and deliver ideas. We need to find ways to better establish relationships between spaces, collaborate and share as much as possible.

Least Resistance: How Desire Paths Can Lead to Better Design – 99% Invisible
Informal ‘desire paths’ can form with as few as fifteen traversals of an unpaved route, creating spontaneous new trails…99percentinvisible.org
Beyond distributed and decentralized: what is a federated network?
Reading academic texts on networks, it is easy to get confused by the various labels attached to the networks described…networkcultures.org
Richard Long, ‘A Line Made by Walking’ 1967
This photograph shows a straight line of trampled grass receding towards tall bushes or trees at the far side of what…www.tate.org.uk

This is a place for ideas and reflection, new work and links to research, media and other publications.

My name is Stephan Caspar. I’m an educator and filmmaker. I help people create media and tell stories. I am interested in storytelling using digital tools and techniques.

You might see me on my bike or swimming in the sea. I’m also learning the trombone. You might not want to live next door if you can help it. 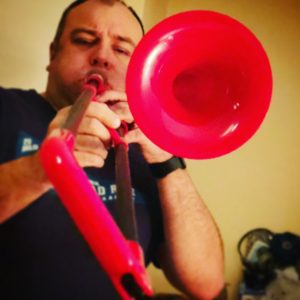 To the extent possible under law, Stephan Caspar has waived all copyright and related or neighboring rights to dots and spaces. This work is published from: United Kingdom.